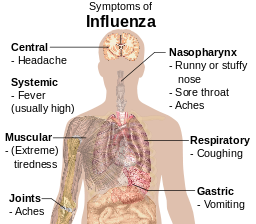 Continuing where we left off last week, we finish looking at the Top 5 biggest myths about the flu. To discover the top 3 myths debunked last week, see 5 Biggest Myths About the Flu Part I .

Elodie Ghedin of NYU’s Center for Genomics and Systems Biology and the College of Global Public Health, an expert on the flu, says by the time you’re sick, antivirals probably won’t do you much good.

The only antiviral drugs that work at all these days, she explains, are called neuraminidase inhibitors, and they can’t do much once you’re already showing symptoms. To understand why, you have to know a bit about how the flu works.

The surface of the virus, Ghedin explains, has two proteins: hemagglutinin and neuraminidase (the “H” and “N” in H1N1). Hemagglutinin helps the virus get into a cell.

“But once the virus has gone into the cell and hijacked the cell to make copies of itself,” Ghedin says, “there are new little viral particles that start budding off the surface of the cell like little oil drops.”

Neuraminidase acts like a scissor that cuts those new viral particles loose so that they can go on to infect other cells. A neuraminidase inhibitor prevents that process—the viral particles bind to the already-infected cell and die there before they can move on and multiply.

“You want that inhibitor to be applied early on, when you just have a few cells that are infected,” Ghedin says, because the virus multiplies quickly, causing inflammation and the immune response that makes you feel miserable. “Your symptoms usually start two days after you’ve been infected, when you have the highest number of viruses in your body. So it’s practically too late at that point.”

Ideally, to keep from feeling sick, you’d need to take the neuraminidase inhibitor after being exposed to someone who has the flu (say, when your spouse comes home from work sick), but well before you started feeling symptoms yourself—a pretty narrow window. Plus, Ghedin cautions, it’s important to limit the prescription of antivirals to those who could die from the flu, because drug resistance develops quickly in flu viruses.

MYTH #5: A SURGICAL MASK WILL KEEP ME FROM INFECTING OTHERS

As anyone who’s ever silently cursed a coughing coworker may have suspected, respiratory viruses can be very contagious, and flu is no exception.

“When you sneeze,” Ghedin explains, you project fine particles of a few different sizes. The biggest ones, like water molecules, fall to the ground right in front of you, while medium-sized particles travel about three feet. “But then there’s a fine mist that can go 20, 30, 40 feet or more,” Ghedin says, “meaning that you can easily contaminate a whole room when you sneeze.”

That’s seriously bad news for your colleagues, friends, and fellow commuters on a crowded subway car—especially infants, pregnant women, the elderly, and others (such as people with asthma) at risk of developing life-threatening complications with flu.

Oh, and those masks people wear to prevent infecting others? They’re good at stopping bigger droplets, but unless they’re worn very tightly around the nose and mouth, Ghedin says, the smallest particles can actually squeeze past the mask and onto the side of the face … and then out into the world.