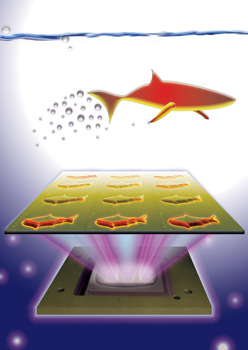 In the past, the creation of similar microrobots yielded microbots that were incapable of performing sophisticated tasks because they featured simple designs and were primarily made of homogeneous inorganic materials. However, now researchers at the Univ. of Califorinia have demonstrated a better, simpler way of creating more complex microrobots.

The team of researchers led by Professor Shaochen Chen and Joseph Wang of the Nano Engineering Dept UC San Diego were able to custom-build microfish that swim around when placed in a solution containing hydrogen peroxide. The Nanoengineers added functional nanoparticles into specific parts of the microfish’s bodies to provide further functionalities. Platinum nano-particles were installed in the tails which then reacts with hydrogen peroxide and propels the microfish forward. The researchers then installed magnetic iron oxide nano-particles in the microfish heads allowing them to be steered using magnets.

“We have developed an entirely new method to engineer nature-inspired microscopic swimmers that have complex geometric structures and are smaller than the width of a human hair.  With this method, we can easily integrate different functions inside these tiny robotic swimmers for a broad spectrum of applications,” stated Wei Zhu, a nanoengineering PhD student in Chen’s research group at the Jacobs School of Engineering at UC San Diego.

The team incorporated toxin-neutralizing nano-particles throughout the bodies of the microfish, polydiacetylene (PDA) nanoparticles. The polydiacetylene (PDA) nanoparticles were used to capture harmful pore-forming toxins like those also found  in bee venom. The researchers pointed out that the powerful swimming ability of the microfish greatly enhanced their ability to clean up toxins.

The researchers pointed out that the microfish can serve as detoxification systems and as toxin sensors and that they were not limited to just creating fish-shaped microbots; birds or other organisms are also possible thanks to 3D printing technologies.  In addition, the research authors stated that the possibilities for future uses were very exciting. Jinxing Li, nanoengineering PhD student working on the team stated that one such possibility would be to encapsulate medicines inside the microfish and use the microfish as a new method for drug delivery.

Researchers stated that the synthetic microfish will inspire a new generation of “smart” microrobots that have diverse capabilities such as detoxification, sensing and directed drug delivery, researchers said.

The research has been published in Advanced Materials.